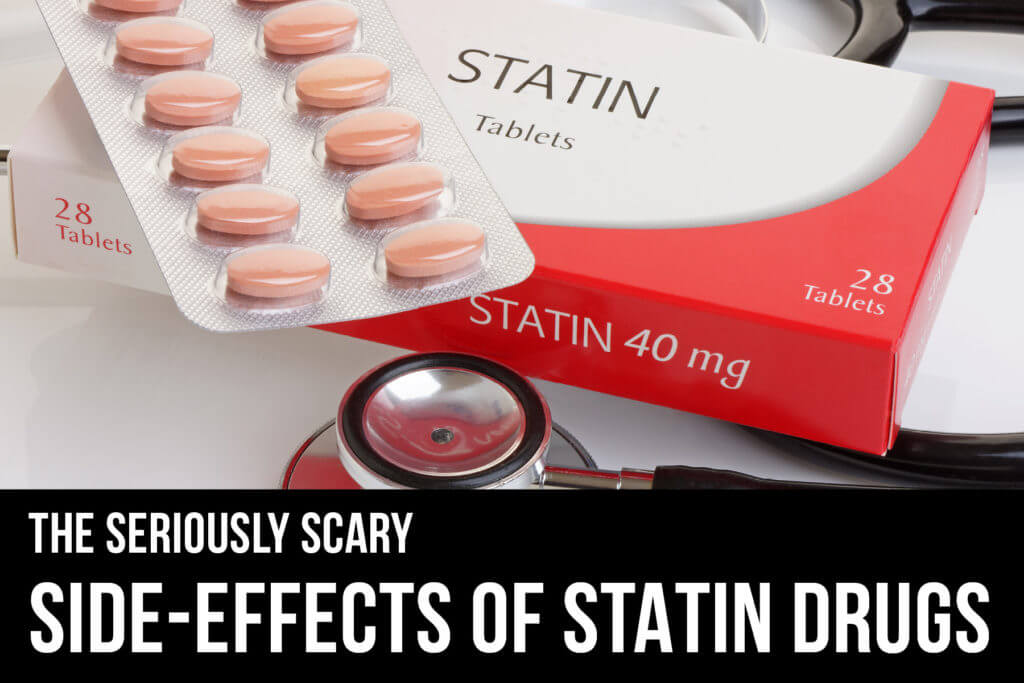 Disclaimer: The following information has not been approved by the FDA. This information should not be interpreted as medical advice and is not a substitute for a visit with a medical care professional. Always speak to your doctor about any health concerns.

Statins are one of the most commonly prescribed drugs. Chances are, you know several dozen individuals who are currently taking them — including yourself.

Statins are a class of drugs that are most commonly prescribed to patients with high levels of LDL (bad) cholesterol. They work in the liver to prevent the formation of cholesterol, lowering the amount circulating in the bloodstream. Doctors prescribe these drugs in order to help lower cholesterol levels in the blood, and in so doing, help to prevent heart attacks and stroke.

But there’s a secret.

There is strong evidence to suggest that the side effects of statin drugs can significantly contribute to, worsen, or cause serious health conditions. Rather than preventing a problem, it seems as though statins are actually causing one.

The number of Americans taking statin is steadily rising. Relatively few are aware of the risks and side-effects of statin drugs.

The most common side effect of statins is muscle pain. It may be experienced as soreness (such as that following a hard workout), tiredness, or weakness. Sometimes the pain may be a mild discomfort, while for others it can be excruciating, interfering with daily activities and sleep. The pain is usually experienced in the thighs, shoulders, upper arms, and/or lower back.

The higher the dose of statins, the greater the risk of developing muscle pain. In some cases, statins can cause severe muscle damage, called rhabdomyolysis. This condition is the breakdown of muscle cells, which then release proteins that damage the kidneys. This results in intense muscle pain, liver damage, kidney failure, and even death.

If you’re experiencing any of those symptoms, we strongly recommend that you contact your prescribing physician as soon as possible.

Statins drugs have been linked to an increase in liver enzymes in some patients. For those on multiple forms of cholesterol-lowering medication, this risk is increased. Elevated liver enzymes indicate inflammation or damage to the cells in the liver. Left unresolved, the liver damage will progressively worsen.

Unfortunately, there are no symptoms to indicate an increase in liver enzymes. This means that the only way to ascertain possible liver damage due to increased enzymes is through regular testing.

In 2011, a study found that people who took statins had more symptoms of asthma and worse lung function than those asthma patients who did not take statins. The study followed 40 patients over a year, with check-ins every three months to monitor symptoms, medication use, and lung function.

Patients taking statins were recorded as performing 35 percent worse in lung function than they did at the start of the study, while those who did not take statins saw their lung function decline by only 14 percent. Additionally, those patients taking statins used their inhalers 72 percent more often than at the start of the study, while those not on statins used their inhalers only 9 percent more than they had previously. Patients on statins also reported worse asthmatic symptoms during the day and more frequent sleep disruption at night.

Evidence has shown that statin use could lead to unintended adverse renal damage, especially in relation to high-potency statin medications. The use of high-potency statins has been associated with an increased rate of kidney injury. According to this study, patients on high-dose statins are 34 percent more likely to experience kidney damage within the first 120 days of treatment.

Another statin drug side effect is the increase in blood sugar and blood sugar spikes. In fact, this has been so widely accepted, that even the Food and Drug Administration updated its advisory in 2012 to include warnings about the increased risk of higher blood sugars and Type 2 diabetes.

One study found a 9 percent increase in the risk of statin drug users developing diabetes, while another study stated that their results showed a 12 percent increase. Both studies agreed that the risk increases for those on high doses of the drugs.

Despite hopes that statin drugs, touted as an anti-inflammatory, would help to help individuals struggling with memory loss or dementia, statins actually prove to have had the reverse effect on many patients. Individuals have developed memory loss, confusion, and decreased ability to focus while taking statin medications. Dr. Duane Graveline, a medical doctor and former astronaut, has written an entire book on this very topic, titled Lipitor: Thief of Memory.

Researchers from Ireland found an increased risk of cataracts thanks to statin use. This research was supported by a subsequent JAMA study, which affirmed the increased risk of statin drug users developing cataracts compared to non-users. Cataracts are a clouding of the eye lens and are a leading cause of poor vision among seniors.

It’s widely acknowledged that patients are at risk of developing depression, suicidal thoughts, and violence within the first month of taking statin drugs. However, a recent study argues that depression risk increases with long-term statin use.

Statin drugs typically do their job of decreasing cholesterol in the blood very effectively. However, too much decrease of cholesterol can disrupt the serotonin in your body. This hormone takes part in regulating mood and social behavior, sleep, memory (short and long-term), sex drive, and function of the digestive organs — and more.

Heart Disease and the Hardening of Arteries

Despite being prescribed as a way to help decrease the risk of heart disease, new research is suggesting that statin drugs can actually contribute to heart disease.

Professor Harumi Okuyama and his team at Nagoya City University, Japan, after significant study and investigation into more than 20 major research papers on the drugs, have come out on the side opposing statin use.

Dr. Okuyama said: “We have collected a wealth of information on cholesterol and statins from many published papers and find overwhelming evidence that these drugs accelerate hardening of the arteries and can cause, or worsen, heart failure.”

The researchers state that they found statins to have a negative effect on vital body processes that are linked to heart health. Patients taking statins were also shown to be more likely to have calcium deposits in their arteries — a condition which has been directly linked to heart attacks. Finally, statins block the body’s’ ability to produce K vitamin, which prevents calcification of the arteries.

Dr. Okuyama and his team also point out that many of the studies supporting the use of statins are unreliable as they are industry-sponsored studies.

More side effects of Statin Drugs…

According to Dr. Mercola, for every 10,000 people taking a statin, there are:

His research also indicates that statin use can cause or contribute to the following:

Regardless of which side you fall on when it comes to the risk vs. benefit debate of statin drugs, there is one point upon which we can all confidently agree.

The best possible solution is to lower LDL cholesterol without the use of drugs.

There are natural alternatives to statin drugs. At The Healthy Place, we have worked with hundreds of individuals who are struggling with high cholesterol. Many of them have already made significant life changes to diet, exercise, weight, stress, and sleep to help give their bodies the nutrition and care it deserves, and others are still working towards making small changes.

We have a proven track record of helping people lower and maintain an optimal cholesterol level with just a couple of supplements in our store. Yes, we know that this is a big claim — and we wouldn’t make it unless it were 100% true. We’re passionate about helping people find health solutions that support and nourish the body naturally, without the use of drugs that can cause or contribute to health problems.

If you have more questions on statin drug side effects and natural statin alternatives, we’d love to help you out. Stop by the store or give us a call to talk to one of our wellness consultants.

*Disclaimer: All information and recommendations given on this site, in email correspondence, newsletters or other materials provided by The Healthy Place is for informational and educational purposes only and should not be construed as medical advice nor be viewed as a substitute for a face-to-face consultation with a healthcare provider. Consult a licensed healthcare practitioner before modifying, stopping, or starting the use of any medications, health programs, diets, and/or supplements, as well as regarding any health concerns you may have. Our statements and information have not been evaluated or approved by the Food and Drug Administration. As with any health-related program, product, or service, your risks and results may vary. We expressly disclaim responsibility to any person or entity for any liability, loss, or damage caused directly or indirectly as a result of the use, application, or interpretation of the information provided to you here.”

One comment on “The Seriously Scary Side Effects of Statin Drugs”